How do you launch an Aston Martin luxury condo tower? With sports cars and helicopters

So when the British auto manufacturer gave the public a peek at their first foray into real estate development — the 66-story Aston Martin Residences luxury condo tower in downtown Miami — the unveiling was a fittingly over-the-top affair. 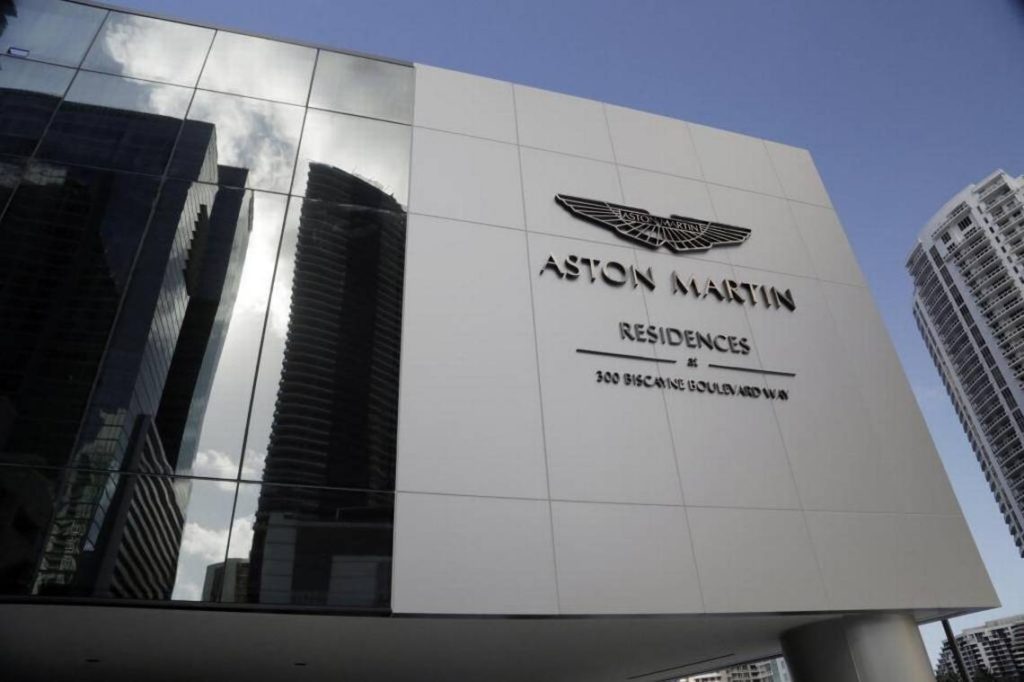 The Aston Martin Residences sales center at 300 Biscayne Boulevard Way in downtown Miami opened its doors on Thursday May 22.

On Thursday night, a select group of VIPs were invited to a party aboard a massive yacht that sailed from the just-opened three-story Aston Martin Residences sales center at 300 Biscayne Boulevard Way — with an Aston Martin sports car adorning the boat like a candle on a birthday cake. (A crane was used to put the vehicle in place).

On Friday, Aston Martin and G&G Business Developments, the Miami-based real estate firm owned by Argentine supermarket magnate German Coto and his mother Gloria, taxied a handful of magazine and TV journalists to Hard Rock Stadium via an Aston Martin Rapide, then allowed them to take their choice of a silver or burnt orange — priced at $250,000 each, capable of a top speed of 220 mph — for a 20-minute test run around the neighborhood.

The day was capped off by a helicopter ride over the condo canyons of downtown Miami, giving those journalists a bird’s-eye view of the prime spot between the Miami River and Biscayne Bay where the tower will be built.

What does any of this have to do with selling pricey real estate? Nothing — directly. But at a time in which Miami’s luxury condo market ($1 million and above) is glutted by a 46-month supply of new and existing inventory, developers are resorting to increasingly creative tactics — concerts, designer labels, rock-star architects — to make their projects stand out. Miami, which leads the U.S. in the percentage of real estate cash buyers (39.4 percent of overall sales and 54 percent of condo sales), remains a lucrative market for developers, who rely on fat down payments to fuel construction and keep prices high.

“There’s a tremendous amount of hype going on in this business and there always has been,” said Christopher Zoller, an associate at EWM Realty International and Christie’s International Real Estate. “Salesmanship is everything. It’s P.T. Barnum getting people inside the tents. Developers need the media. They need them to get the word out to the world. If they can take a dozen journalists on a helicopter ride, that beats having to take 150 potential buyers somewhere else. This developer has a lot at stake.”

The Aston Martin Residences are scheduled to break ground in the fall of 2017, with completion scheduled for 2021. The 391-unit building will sit on a 1.25-acre parcel of riverfront land that G&G purchased in 2014 for $125 million — the most ever paid in South Florida for a lot of that size. Units will range in size from 700 to 19,000 square feet, including seven penthouses and a duplex penthouse. Prices start at $600,000 and go up to $50 million.

G&G claims nearly 20 percent of the building’s units are already under contract, with deposits of 10 percent exceeding $100 million. Other luxury developers with pre-construction sales typically start with reservations first. 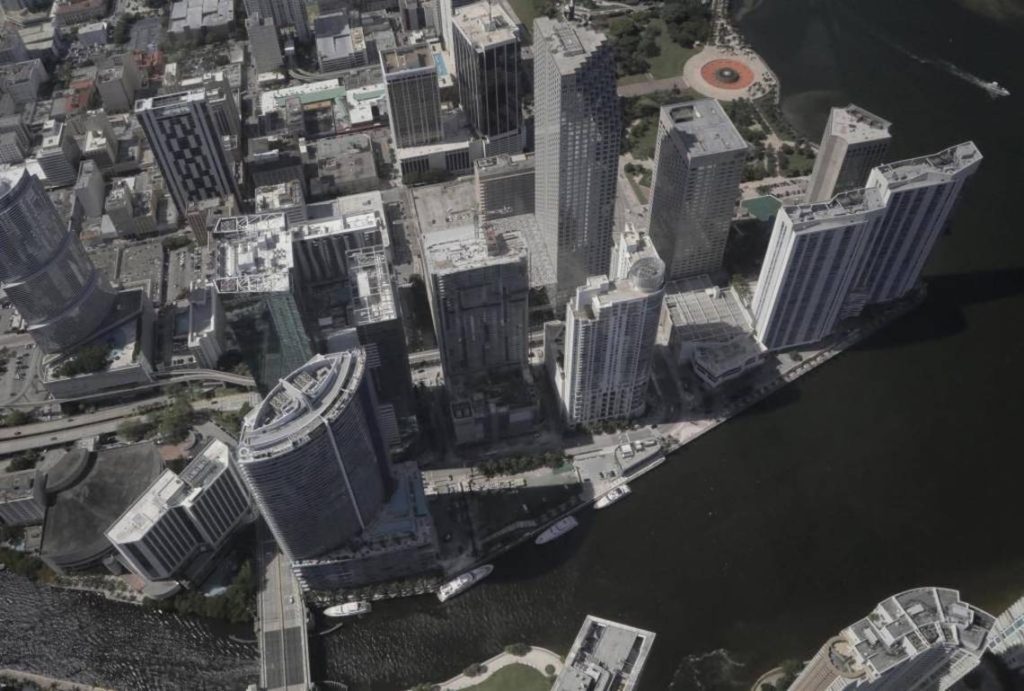 The site of the Aston Martin Residences tower at 300 Biscayne Boulevard Way as seen from the air. A triangular lot located on the mouth of the Miami River, the site is partially shaded in this photo. Its ‘s located on the lower center of the photo and three boats can be seen docked by the property to the right of the Epic Hotel.

Aston Martin team is confident. Unlike the Porsche Design Tower in Sunny Isles Beach, which has earned global attention for its elevator that allows residents to park their cars inside their condos, the Aston Martin Residences will take a more subtle, less gimmicky approach to incorporating the brand into the building’s common areas and amenities.

Inside the sail-shaped building designed by architects Luis Revuelta of Miami and Bodas-Miani-Anger of Argentina, door handles will feature the same hand-stitched leather used for the interior of Aston Martin vehicles. Furniture and accents will be made out of the same signature carbon fiber and aniline leather the automaker uses for its top-of-the-line 820bhp Vulcan racer — one of which graces the lobby of the sales office, sporting a custom, gleaming-white paint job. 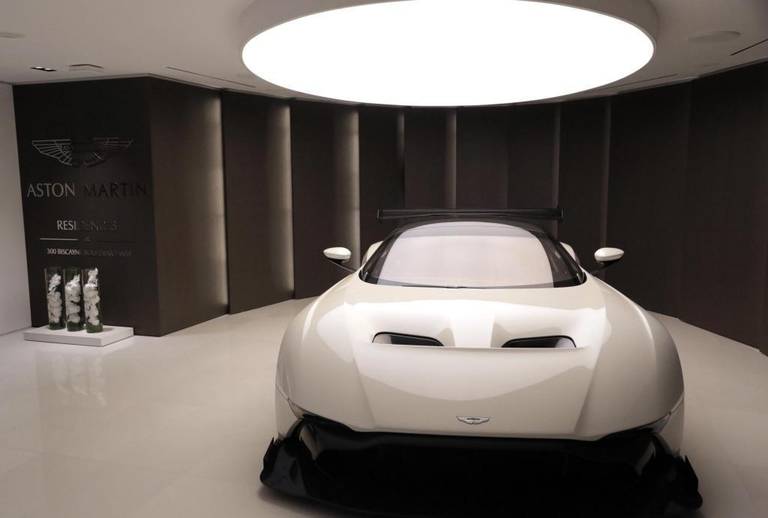 A $2.3 million Aston Martin Vulcan — one of only 24 in existence — greets guests at the three-story Austin Martin Residences sales senter in downtown Miami.

Marek Reichman, Aston Martin’s chief creative officer and executive vice-president, says the tower will be an extension of the automobile line’s enduring appeal.

“An Aston Martin is a beautiful and timeless sculpture,” he said. “We’ve made 80,000 cars and 95 percent of them are still in existence, because people don’t trade them in or sell them — they hand them down to the next generation. But beauty goes beyond form. It’s also in the craftsmanship, the materials, the hand-built nature of our products. In many ways we wear our label on the inside. We are an elegant brand that doesn’t have to shout, because we have confidence in who we are and the style we possess. When you walk into this building, you will have the same experience Aston Martin owners feel when they get inside their cars.”

Coto also has the deep pockets necessary to pay for the entire project himself, instead of relying on financing and market trends. Established in 1987, the Coto Supermercado franchise in Argentina generates annual sales of nearly $3 billion and employs 25,000 workers.

German Coto, who owns the Miami-based real estate firm G&G Business Developments with his mother Gloria, speaks to guests during the opening of the sales center for the 66-story Aston Martin Residences luxury condo tower.

“We came here to build a tower and if the market goes our way and at some point we can take on a financial partner, we’d consider it,” Coto said. “But for now, it’s not a necessity. We have a family tradition of innovation. This is our first construction in Miami and when we announced the project last year, our expectations were zero. Today, the sales center is open and sales are already exceeding expectations, so we’re already happy.”

Said Alicia Cervera Lamadrid, a managing partner and principal at Cervera Real Estate, the broker representing the Aston Martin Residences: “You have a developer who is extremely solid financially. [He] looked at me when we were talking about the conditions of the market and said, ‘I’m going to build my building, period.’ Being able to look at a buyer in the eye and say, ‘Construction is starting in September. This building will be finished,’ makes a huge difference.”

One of the tower’s early buyers, Carmina Zamorano, is proof that the concept could work. Zamorano, the Mexican-born president and CEO of the real estate firm Carnan Properties, recently sold her home in Gables Estates because she and her husband live in Houston. But they have put a down payment on a two-story, six-bedroom penthouse at the Aston Martin Residences tower, priced at around $10 million — and not just because she happens to drive an Aston Martin herself.

“I am so in love with Miami, we wanted to have our second home there,” she said. “We have three daughters and plan to eventually retire there. But we were waiting to see what the building and units would look like, because we were expecting a lot. The design is quite nice, because it’s elegant but also sharp and modern. There were a lot of options for us to choose from, but this is the one that matched exactly with the way we live.” 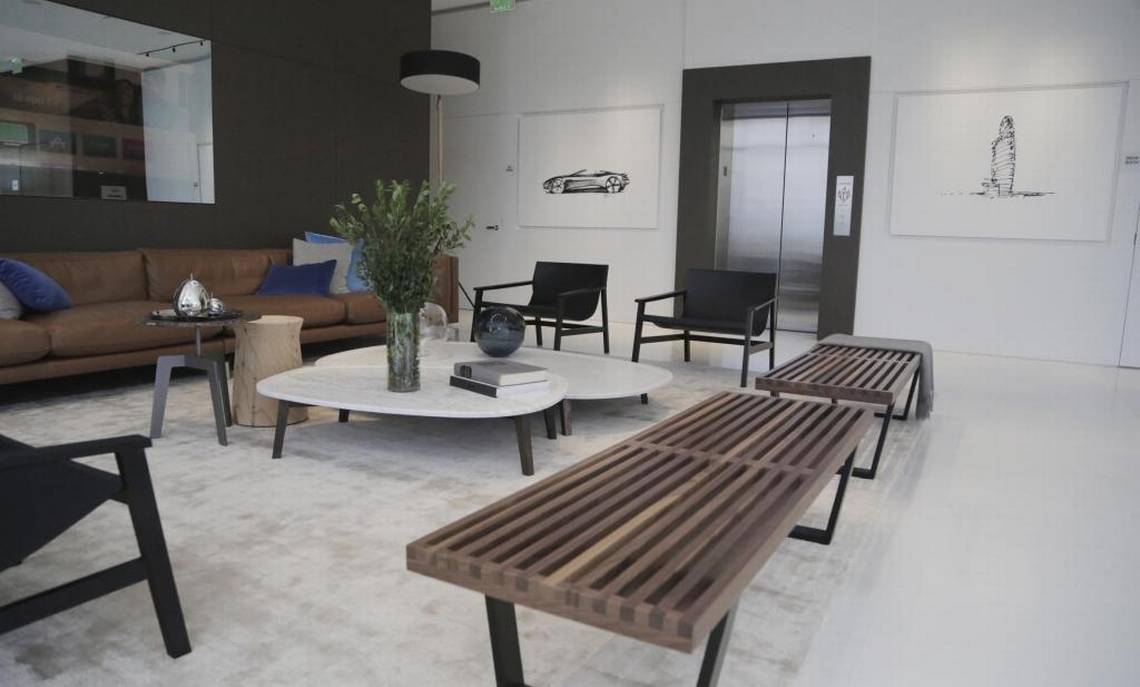 But despite Coto’s formidable cash resources, the Aston Martin Residences will have to attract a lot more buyers like Zamorano in order to succeed.

“A privately funded project reduces the risk, but the premium for new construction can be lost if market demand does not meet the price expectations of the developer and the inventory sits at time of completion,” said Danny Hertzberg, Realtor for The Jills Group, which specializes in luxury properties.

“Trends change quickly in terms of design and finish. The downtown/Brickell luxury condo market is almost entirely dependent on Central and South American buyers and the timing could not be worse for new inventory in this segment. Well-known name brands may help draw attention, validate a project and drive sales. But a brand alone cannot overcome the current market conditions.”

G&G’s costly gamble may turn out to be a fascinating experiment of the elasticity of Miami’s real estate market — as well as a test of the global following of the Aston Martin brand. If that outrageously elegant Vulcan in the sales center were for sale — which it isn’t — the price would be $2.3 million. Only 24 of the vehicles exist.

But whoever nabs the tower’s $50 million penthouse will get the car as a perk, because that’s just how Aston Martin rolls.